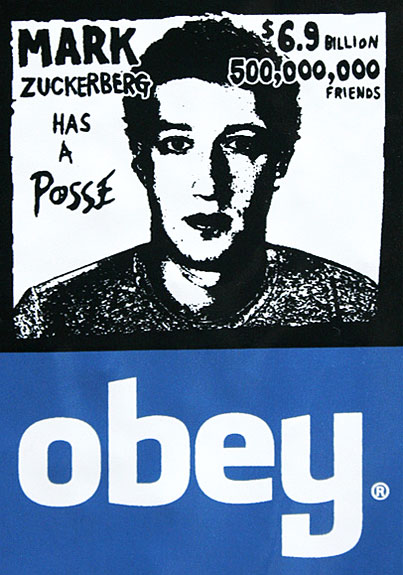 Under the circumstances that the 37th G8 summit starts in 2 days, at May 26-27, in the commune of Deauville in France, today and tomorrow the eG8-Forum is held in Paris where "confirmed attendees include Eric E. Schmidt of Google, Mark Zuckerberg of Facebook, Jeffrey P. Bezos of Amazon and Rupert Murdoch of News Corp" pay for a place to sit next to the mightiest just something between 100 000 to 500 000 Euros. “In spite of a harmless sounding rhetoric, the E-G8 Forum is a smokescreen to cover control of governments over the Internet,” wrote Jérémie Zimmermann, a spokesman for La Quadrature du Net, a group that campaigns against restrictions on the Internet."

From the French President’s speech: “… to invite in Paris the ecosystem’s main stakeholders, so that their vision and knowledge may guide the heads of States’ meeting.

"The commercialization of the internet and the emergence of capitalist financing has enabled the enclosure of this information commons, translating public wealth into private profit. Thus Web 2.0 should not be thought of as a second generation of either the technical or social development of the internet, but rather as the second wave of capitalist enclosure of the information commons. The third wave of enclosure of the information commons is already coming into view. Cloud computing, provided by large corporations such as Google and Amazon, where customers do not own the physical infrastructure they use, is further centralizing the infrastructure of the internet. Additionally, legislation, such as the 'Telecoms Reform Package' presented to the European Parliament, seeks to make it possible for service providers (large telecommunication conglomerates) to decide which websites their users are able to access."

Wherever you are, either protesting on a Plaza in Madrid, Hamburg, Amsterdam, Kairo or Tunis, we call you to start sketching, photographing and submitting your very personal creative expression to tell the group of eight what you think of their interests in the internet!

Here you can find the original call for creative action re-posted from g8internet.com. This post is also available in: French, German, Spanish, Portuguese (Brazil)

Everyone is invited to send URIs web addresses of any bits of expression produced in answer to this call to submit@g8internet.com, they are then collected and published on their website called G8 vs Internet.

The Internet is the place where we meet, speak, create, educate ourselves and organize. However, as we are at a turning point in early web history, it could either become a prime tool for improving our societies, knowledge and culture, or a totalitarian tool of suveillance and control.

After 15 years of fighting the sharing of culture in the name of an obsolete copyright regime, governments of the World are uniting to control and censor the Internet. The black-out of the Egyptian Net, the US government’s reaction to Wikileaks, the adoption of website blocking mechanisms in Europe, or the plans for “Internet kill switches”[1] are all major threats on our freedom of expression and communication. These threats come from corporations and politicians, unsettled by the advent of the Internet.

As a host of the G8, France’s president Nicolas Sarkozy wants to step up centralized control over the Internet. He has convened world leaders to a summit aimed at working towards a “civilized Internet”, a concept he borrowed from the Chinese government. By creating fears such as “cyber-terrorism”, their objective is to generalize rules of exception in order to establish censorship and control, thereby undermining free speech and other civil liberties.

They will package this policy using words like “democracy” and “responsibility”, but look at their acts. Sarkozy has already enabled disconnection of citizens from the Internet and the censorship of online content in France.

The Internet allows us to express our opinions universally. The Internet unites us and makes us strong. It is a space in which the common civilisation of our diverse planet meets. Our imaginations, through all kinds of media we create and publish, help us protect our rights and a free Internet. As world leaders gather at the end of this month, we must all come together and use our creativity to reject any attempt at turning the Internet into a tool of repression and control."